"If He Starts A War!" A Rational Rebuttal. GHI Editorial.

"If He Starts A War!" A Rational Rebuttal. 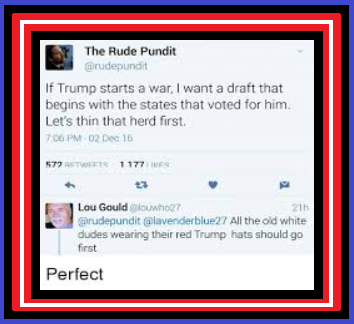 Often I hear many detractors of the POTUS and his supporters say if he starts a war all his supporter should be drafted. Then many would go further and desire those citizens then be used as cannon fodder. Let us deescalate the rhetoric and just identify these morbid fantasies as rude. There are a few reasons for laughs when confronted with this.

The first point that makes this comically venomous in my estimation is that around 57% of veterans approve of the Potus and though active duty approval for the Potus has dropped to 42% this is still a substantial number. Furthermore the drop of approval in the poll is in regards to military command decisions. Some of these unpopular decisions among active military are actually choices that illuminate a second glaring hole in the TDS day dream.  Much of the reporting using this poll ever so briefly mention the focus on military decisions. The outlets, rather,  attempt to spin the results of the poll  as a reflection of the troops on Trump's entire  presidency. The Truth is these polls are not an indicator of actives troops rating on the Donald's domestic policy. Perhaps, even more Troops disapprove with his domestic policy perhaps many more approve. These findings don't determine this but then I ask why the spin?
Either way just under half the active Troops polled are supporters, near 60% of Veterans polled rank among  the deplorables. So it seems demanding Trump supporters serve his agenda is already being done in a large way.

This Second point is hilarious. Not only is this one partly accounting for some active service members disapproval but also flies in the face of the entire premise. Trump has been keeping us out of sustained conflict. He has avoided war mongering while at the same time (arguable) holding a strong line in foreign diplomacy. It seems possible some service members favored greater retaliation for instances like the boarding of U.S vessels in the straight of Hormuz, the shooting down of our drone and the U.S embassy threat in Iraq . However, contrary to what TDS suffers that continually push the opening fairy tail, the President has shown prudence while also ordering surgical engagements leading to the take down of 4 enemy leaders. Those being the number 1 and 2 of Isis, the #1 Al Qaeda leader in Yemen and Solumeini the great orchestrate from Iran. These actions led us away from war not towards it

In dealing with North Korea his negotiations have gotten a lot further than anyone else's since the beginning of the conflict in 1952. Negotiations are still bumpy and it still can go either way but let's look at this critically for a minute.
Much of this fear mongering the diluted left has been engaged in started with the Pres. Trump vs. Kim Jung Un twitter spat. Well what happened? Trump brought Un to the table. Missiles stop flying over Japan. Then of course as is custom in East Asian foreign relations saber rattling and penis waving commenced. Trump understanding the necessity of this practice culturally as well as the importance of saving face tried something, a great thing, no American President or Secretary of State was savvy enough to do. He offered Kim Jung Un a way out with saving face. The President entered the negotiation with a hard line and display yet both being heads of state brought this to Un individually as an equal. Which of course caused more outrage from know nots.
POTUS showed  respect  (whether you believe Un deserves it or not) to begin the ball. Trump eventually earned  Un's respect by understanding the ritualistic nature  Un needed to save face in those talks. Case in point Kim Jung Un insulting Mike Pence. Trump did exactly what needed to be done. This was a test  by Un to evaluate Trump's Metal. As always the media rushed to assign failure and condemnation when in fact a positive step had occurred. The Potus got a dance and led the dance by dancing to the Supreme Leader's song.
Every time the media and the left panicked. This simply for them all having no understanding of what was taking place. For being exactly the ignorant, westcentric, privileged, conceited mess they all have accused the Potus of being on a daily basis. This of course is a work in progress but we are far further from war here then when Pres. Trump took office.

Not bad for An illegitimate,  xenophobic,  privileged, nincompoop with no experience.


This sort of faux outrage or ignorance by TDS sufferers has been on display in other areas too. This has been seen with panics over trade policy. This stupidity has reared it's oafish head while the administration has demanded allies honor their agreements. Simply anytime America's best interest has been put first. A cabal of elitists have poured a sour putrid slop into the cult of personality troth where the controlled media, bought politicians and corporate subsidiaries have been more than happy to ladle it out like punch to the public. What's worse so many are willing even eager to chug it down.

War may happen the world is a powder keg in good times. However, if one believes Trump is working towards horror they most liking are suffering from delusion. So, if one is among that thought maybe rethink that outrageous talking point.

"Why Acquittal is the Only Option to Save Civil Liberty" GHI P.O.P (Opinion)

Why Acquittal is the Only Option to Save Civil Liberties.(Opinion)

In speaking with a confirmed Trump hater today it occurred to me that many of them believed Adam Schiff's "parody" of the transcript. This to me is absolutely absurd and shows what power media plays over the Republic. More than that media the shredding of the Constitution is an even bigger threat. Due process was ignored in the House. Furthermore, getting their way Democrats still could find no evidence of a crime. They sent articles to the Senate with no crime or frankly any unethical wrong doing of any kind. If you don't believe me check for yourself.

This same person was entirely unaware of Joe Biden admitting quid pro quo publicly. Also this person was unaware that the same video implicates Burisma in wrong doing. The other lie MSM and House Democrats spread stating that questions into Biden or Burisma were baseless. This has led to a split between Republicans about how many witnesses they want to hear from. Of course as always these day this has been misleadingly spun.

The reason why many Republicans would have liked to hear from several other witnesses was they believe not only will Trump be vindicated but that all of these people will either be implicated or caught in perjury. As tempting as that scenario would be for Republicans it must not be sought. Fore if it was a precedent allowing the legislature to deny the  Civil liberties of any American on any whim or mob rule would be set. This is the scariest thing about this perversion of justice.

There is no crime cited, no statute that has be violated there can not be a trial. In any courtroom in this country this would be immediately thrown out on its face.  So as much as some Senate Republicans might want to use a trial to expose Nadler, Schiff, Pelosi, Biden and others by doing so they would cause greater harm than good. They would be creating a legislature with no check and an atmosphere where presumption of innocence is gone. Even more than this eventually this precedent would bleed into the Judiciary giving the state unbalanced unchecked power against the citizen. A new world in which a citizen will not even have had to commit a crime in order for the state to charge them. The state wouldn't have to identify a crime before destroying a citizens life. This is Gestapo style governance and will lead to revolution.

Acquittal is the only way to save our civil liberties and the Republic. 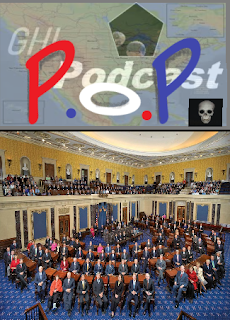