Hostilities of an American Civil War: New Jersey Divided in the American Revolution. 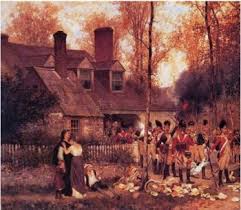 Hostilities of an American Civil War: New Jersey Divided in the American Revolution.

New Jersey endured two civil wars in her existence. The second civil war, the war between the states did much to create our modern New Jersey. The decade leading up to the American civil war saw the finalizing of our counties borders and the repositioning of the two great cities that lie across the waterways that form the jutting land mass. During the conflict much of what would become municipal and county our  land was first set aside for the parading and drilling of regiments from the garden state. Industry boomed to supply the war effort and a unity here in New Jersey was finally reaffirmed.

The first civil war, the war between the state did much to create the American nation. It was a far more brutal civil war for Jerseyans. The late 1700's conflict divided the mid Atlantic bread basket sharply  between Tory and patriot. Often, entire regions of the peninsula swayed one way or the other. This would accelerate brutality as both views jostled to control her resources. Reprisals of confiscation against the civilian population was common during this time. Retribution far worse could be expected by the participants. A list of characters, so Jersey, heroic and villainous would emerge from the struggle for independence. These actors performing on Nova Ceasarea's greatest stage lent massively to the identity defining her people even today.

Here are three Revolutionary War era partisan events  that speak to the hostilities in New Jersey. New Jersey a poignant microcosm for the creation of the United States. 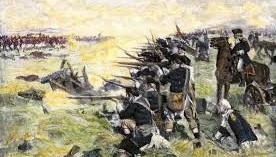 The first almost forgotten engagement at Monmouth Court House was a key development in a brief but impacting  war period known as the Loyalist ascendancy. General Howe ordered the forming of new Tory militias to harass and help trap the American threat by splitting New Jersey in two. In perfect position for Howe's end game, Monmouth county was heavily loyalist at the time. By January 2nd 1777 at Monmouth courthouse Provincial Colonels Elisha Lawrence and John Morris had gathered a regiment of between 200 and 250 men loyal to the king. A small but local force that prudence necessitated to keep Howe's armies logistics and hence moral at superior levels.

Washington's scouts immediately delivered word. Not wanting a thorn stuck in his side as he began the reconquest of Nova Ceasarea Gen Washington ordered the 11th Pennsylvania with about 120 men under Lt. col. Francis Gurney and a contingent of 80 men from Delaware under Major Thomas Rodney to disperse the Kings raw recruits with haste.

This tiny engagement and American victory was not however inconsequential. The aftermath would change the face of the conflict in new jersey.  Post skirmish the British became hemmed up only controlling the  more developed settlements of New Brunswick and Perth Amboy. A 3 month guerrilla war would ensue as both sides desperately needed supplies. In direct result of this action a large many  men subject to the king abandoned  well over 100 farms maybe more. These hinterland farms could no longer supply  his majesties troops. The result unexpectedly forced Howe to change his entire strategy and the meantime hunger and the forage war would take a toll on his armies moral. The loyalist dispersed and had to abandon their homes for the safety of Staten Island.  The patriots promptly seized all their lands, assets and grain stores upping the stakes for the Torys. With nothing to lose and vengeance in every thought those who escaped this action would become the core of the New Jersey Volunteers. The New Jersey volunteers became arguably the most effective militia unit for either side during the war. They proved themselves quick,efficient ruthless  and deadly.


Isacc Winans Sr. of Elizabethtown, his land in the modern City of Linden, was 65 in 1774. Isaac served his area along the Arthur Kill in a 33 man committee to legally serve our grievances against the crown. Upon the exhaustion of a peaceful legal resolution the senior took on substantial rolls on committees to organize resistance as well as official correspondence. As part of his official capacity his signature would be among warrants to repossess lands and assets from Loyalists neighbors who escaped Washington's reconquest of the garden state in 77 and 78. One such acquisition of private property by the patriots was against the notorious and vindictive Cornelius Hatfield Jr.. Hatfield's farm lands, orchard and cider mill were taken.

Isaac Sr. and his son Isaac Jr. were kidnapped from their Elizabethtown tract now modern Linden home in January of 1780.This was one of the coldest dead winters of the little ice age. The abduction occurred  in the middle of the night and the two prisoners were forced to travel in their own sleigh all the way to lower Manhattan. The Winans would be imprisoned at the infamous Sugar House prison after the all night possibly two day trek across the frozen Newark bay and Hudson River. Isaac Sr. 70 at the time would die in his cell three days after being interned. It was It is not recorded clearly if this raid was carried out by Capt. Hatfield or Capt.         . Still if we account Winans, a neighbor as the immediate authority for the confiscation of the Hatfield orchard, mill and farm, then apply how Hatfield directly applied vengeance  known through several accounts of the cruelty of his methods. It is very likely he was the lead perpetrator of this episode.

In turn Other Winans kin upped their own Patriot resolve. Ben Winans led the clans resistance which would not be with the Continentals but with first the Essex Militia. Himself along with nephew          would then post with the NJ State troops and be in perpetual conflict holding the the most stagnant front line of the war for six years. We have no absolute knowledge if this event against his uncle pushed his commitment. However, we do know after the event he took commission and extended commitment with the Jersey  state troops while his son took over his Essex militia command. It may not been the only factor but it surely must have added to his intent.

3. Hornets Rise: The experience of the French and Indian War a precursor to 21st century  warfare.


"A Hornets Nest" became a common 18th century idiom all across Europe as the spreading of malicious confusion
It is an obvious euphemism for chaos and destruction. During the course of the war several Hessian soldiers would use it their writings or when speaking about the particular hot zones of the conflict.

When Washington and the Continentals crossed the Delaware and New Jersey's first civil war went into full swing the men who took command of the resistance were seasoned. Just like the Continental Commander Gen. Washington these middle aged partisans procured a style of fighting adverse to the invaders in the 7 years war conflict.  Woodland Guerrilla fighting tactics as well as ,Though limited, street to street urban warfare proved essential. 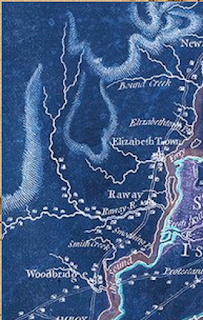 Much is made by anglophile historians about the over all lack of  American victories in large scale battles. This is erroneous in terms of understanding the War for Independence. This war was not fought this way by the victors. It is fair to say that the British failure to proficiently adapt to an easily recognizable precursor to modern warfare as the Crowns Downfall in the colonies.
For the most part, the field did not matter in battle to the colonials. The colonies were able to control much of the resources and supply lines needed by the British regardless of main army actions. If flushed out in Jersey those defenders would just appear again often without warning and disappearing again. In 1777 this inflicted morale fatigue to then Howe's army. Starved for supplies Redcoats and Hessian troops in New York endured brutal winters. 1777 through 1778 the majority of the army relied on salt pork among other rations supplied from as far away as the Caribbean and the British isles alike. Looking across small Arthur Kill from Staten Island in hunger, these troops were forced to spy the bread basket for the new worlds two biggest city.
The Crown's regulars and mercenaries weren't often denied for lack of endeavor. The  insurgency would raid across into New Jersey  frequently. Sometimes, they would have success. That said for 6 years it was never easy as resistance was the norm.  movements were often relayed quickly by patriot women and militia men though often out numbered and out gunned could deprive the expedition of intended goals. Albeit, as  many historians would make a point to say, Jersey would be forced to give up the field. A hollow victory in it's most literal sense.

The Hornet's of NJ, were the first denoted with this 18th century title for stiff, total defense. The buzzing fighters from the swamps to the mountains not only fought a guerrilla war of attrition. These warriors used mobility engaging in street to street urban  as well as hit and run frontier style battling.
The Patriots in New Jersey Menaced columns of British and Hessian troops routinely. Proficient at times living off the land the colonials could attack without warning and fade away from retaliation as quickly as they appeared. After several battles win or lose on Nova Ceasarea's soil the Militias would continue harassment of the marching invader all the way back to the British fortifications and camps. This demoralized even veteran troops not used to this sort of resilient opposition.

A passage from a  Hessian soldier's journal describing the war in new jersey.

"It is almost impossible to surprise the enemy on any occasion, because every house that one passes is an advanced picket so to speak; for the farmer, or his son, or his servant or even his wife daughter fires off a gun, orruns by the foot path to warn the enemy." taken from an entry in the MS journal of a Hessian soldier from the Jaeger Corps August 18th 1780

A true animus between neighbors certainly grew from the covert nature of intelligence gathering during the War. Even after the the 2 year liberation of New Jersey the Crown still had supporters in which to rely. while The continentals in turn exploited the British necessity for intelligence with double agents. The uncertainty between friend and foe did account for escalations sometimes involving kin.
Washington's implementation spy networks such as the Culper ring have been in recent time highlighted for it's effectiveness aiding the more modern style strategy used by the Americans. This praise and illumination is rightfully deserved   However, Washington most relied on the field intelligence acquired by the hornets. They didn't always confront British movements but often relayed them. Remaining concealed,This sort of intelligence  aided in unit positioning and occasionally routing out British sympathizers