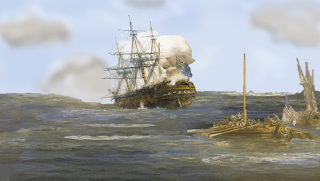 Navy Veteran and Anthropology graduate student at Monmouth University Jaclyn Urmey has spent a large chunk of her professional career on an under the water. Over her adult life Urmey has become beyond fascinated with shipwrecks. This Manasquan native has explored sunken ships around the world. To the benefit of War for Independence history buffs in the Garden State she decided to put her diving experience to good use here in Jersey. Urmey's latest exploration is in Burlington county in the Crosswicks Creek off the coast of Bordentown City.

Working on her anthropology thesis, she set out to study a vessel that was last recorded in 1980. The intent was to see if there was anything left because that report detailed that only 10- 15% of the wreck remained as of  40 years ago. Urmey told the Burlington county times that "she thought of it as a challenge".

That 1980's study determined the 18th century era ship was most likely a merchant vessel lost during the Revolution. So, Urmey and a team of researchers from Monmouth University Urban Coast Institute and Stockton University revisited the site with the newest technology unavailable 40 years ago. Surprisingly much of the documented wreck has remained rather close to the reported description over 4 decades yet slowly deteriorating.

The team has found evidence of other vessel that has not as of yet been documented. This is not surprising as dozens of Continental, Pennsylvanian and British navy ships were sunk during the fall 1777 through the winter of 1778. The major military vessels as well as many merchant ships are  recorded. However, many merchant vessel may also be sunk in these waters. It is believed no less than 24 ships are in this watery graveyard.

This time was known as the Philadelphia campaign. General Howe changed strategies after being unable to flank the Continentals at the battle of Short Hills. Thanks to a heroic stand by Lord Stirling and Daniel Morgan's men allowed the majority of Washington's force the tactically retreat. The Continentals reached the Watchung Mountains a near impregnable natural citadel above the battlefield.

So, Howe boarded ships and took the American capital of Philadelphia. This prompted the Continental and Pennsylvanian navies under command of Commodore John Hazelwood to attempt a blockade of the city. This flotilla was accompanied by the erection of a series of forts along  the Delaware north of the city. the most important were the triple row of chevaux de frise extended between Pennsylvania,  Fort Mifflin and Fort Mercer. This campaign went back and forth with victories on both sides over a few month. This eventually ended as the British were able to break the blockade and capture these forts.

The HMS Merlin, ran aground near the Fort Mifflin in the middle of the Delaware River. During low tide the ship was bombarded by  American Naval vessels and the Fort before being boarded. Oct. 22nd 1777

The HMS Augusta, a 64 gun Ship of the Line of the Royal Navy was sunk off the coast of the Delaware River near Fort Mifflin. Oct. 23rd 1777

So it looks like Urmey's thesis will be quite the work and we wish her luck saving out history. We will keep you updated as more info on her research is released. 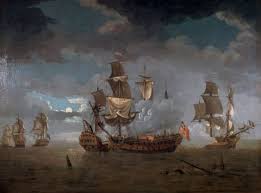